Ike Turner’s Pantsuit is in Beijing 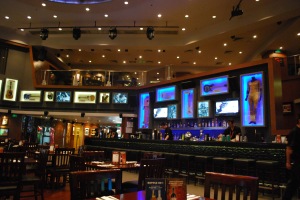 The Bar at the Hard Rock Café, Beijing

Just got back from a trip to Beijing – a wild place – the biggest city I have ever seen – glass high-rises form the canyon walls, eight-lane streets from the canyon floors, and they extend in every direction. In Beijing, drivers use the gas-pedal-and-horn technique. No braking. Cars slip in and out of lanes like fish moving around  a coral reef, and if there’s no room to park on the street, then they park on the pavement.

A welcome respite from the furious, progress-tinged pace of Chinese life is the Hard Rock Café, located sort of up-and-to-the-right of the Forbidden City, nestled in a grove of upscale Western hotels, not too far from Embassy row. As fascinating as Chinese life is, the Café is a wonderful oasis, where the music of Elvis, The Pretenders and the Stray Cats complement onion rings, burgers and (gasps with delight) Guinness. The large central area has a stage, already set up with drums, guitars and mikes. And around the walls are the glass cases containing guitars from McCartney’s Wings, Tom Petty, and Prince, just to name a few. One-piece outfits belonging to Elvis, Ike Turner and even Fred from the B-52’s stand silently in glass cases, and there’s even a row of signed drumheads.

I guess the Hard Rock is like Starbucks for the musically inclined: a consistent customer experience that varies little from city to city. Beijing is a fabulous place, especially if you like high speed and crowds, which I do, but I tell you, two hours at the Hard Rock was an oasis of the cool, beautiful glamour of Rock, Soul, Blues and Motown. 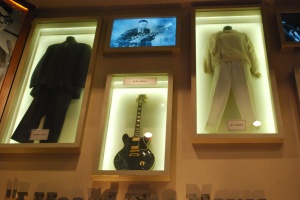 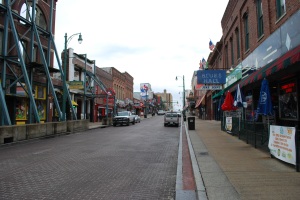 Memphis: Beale Street. Everyone who is anyone has played here.

I went down to Memphis in the Spring of 2010. I wish I could say we went down as a band, but that time has not quite come yet. I went down on business, but mainly so that I could walk the streets of that hallowed city. It isn’t hyperbole to say that there truly is something in the air down there. Beale Street at midnight. That’s where it happens. A couple of blocks closed to traffic, and almost every establishment jumping with the sound of blues, soul, funk, played by people who really should be doing it professionally, on tour with the greats of the business. Who knows, maybe some of them do. I stepped into B.B. King’s and watched in awe. One guitar player looked like Matt “Guitar” Murphy. The other looked like John Byner, the comedian. He played a Strat upside-down, the way Hendrix did, but musically he played like Stevie Ray, except his face constantly was contorting with grimaces and and open-mouthed stares, as he pulled every note – note perfect – out of himself and through his beat-up instrument.

Memphis breathes music. Around the corner from Beale Street is the Rock ‘n’ Soul Museum, where sequined and fur-lined jumpsuits belonging to the King, as well as to Isaac Hayes and a host of other giants, nestle quietly and forever, alongside the mixing consoles from Sun Studios and from Stax Records, and guitars from Carl Perkins.

Between Beale Street and the Museum, and just up a slight rise that makes up part of the banks of the Mississippi, is a statue of a young Elvis, hips and acoustic guitar swinging. 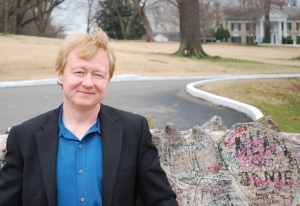 I had a driver who took me to Graceland, which was once a stately mansion, but now looks more like “just” an affluent home. Nice, to be sure, but not on par size-wise with the mega-homes of the Billy Joels of the world. Elvis might have owned two planes (they’re parked across the street), but he couldn’t have taxied either one of them into the foyer, which I think Billy Joel can, and John Travolta still does. My driver patiently took my picture outside the gates of Graceland, and was able to keep the shot tight enough so that the gas station and the fast food restaurants that now flank the estate did not make it into the picture. But of course, the mansion’s true size is in its history. What it stands for as a home and shrine. It is worth the detour to see it.

I have been lucky to have visited many cities in my day, but few come close to having the palpable air of the love of music that Memphis has. New Orleans, yes. Parts of New York City, perhaps. But it seems to all come together, there, next to the big gray river, and it’s a place to which I long to return.