I was watching a YouTube video the other day which talked about “everything that is wrong with modern music.” The host of the video, who goes by the name of Thoughty2, wasn’t even old. Probably around 23. He wasn’t one of those 70-something prog rock old-timers spouting on about today’s music, but instead, he presented some interesting facts about how music is produced and marketed in this era.

Thoughty2 describes how modern hits by people like Taylor Swift are mostly written by a very small group of people, primarily two people in the US and two in Europe who compose using a computer. He also mentions a recurring musical note sequence called the Millennial Whoop that echoes through dozens of modern hits, as this compilation video shows.

I’m not seeking to knock Thoughty2 here. He makes a great argument, and says great things about the Beatles. But every generation deserves its own musical heroes, after all, if only to distance themselves from their parents or older siblings.

I can agree with much of what Thoughty2 is saying, but it’s also possible to think this is a standard “kids today…get off my lawn” type rant. I recall similar arguments put forward in 1963, slagging the long haired, gyrating freakishness of the Beatles or Elvis, and lamenting the disappearance of quality music from Sinatra or the Big Band era. You could go back even further and imagine Thoughty2’s great-great grandfather complaining about how George Gershwin is tearing the classics apart. Even Mozart and Beethoven were criticized for changing music too radically. 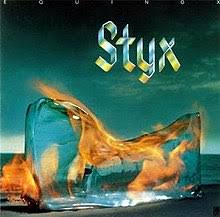 But here’s the part of Thoughty2’s presentation that really resonated with me. He pointed out the effect that free downloadable music has had on its creation and quality. Back in the days of vinyl LPs and packaged CDs, you, as a music consumer, had to head on down to the music store and plonk out some hard-earned money to purchase a collection of songs by your favorite artist. There’s a lot of effort involved in that, and it wasn’t cheap. In 1975 an LP would have cost between $4.99 and $7.99. I remember wishing I could get the compilation triple album by KISS, which was retailing for an astounding $10.99 at the time. That might not seem like a lot now, but back in 1975, minimum wage in the U.S. was around $2.00 per hour. The first album I actually bought was Equinox by Styx, for $4.99. It was gorgeous yellow vinyl.

People would listen to the album side from start to end, poring over the artwork and liner notes as they listened. If the album was good enough, they would commit to getting up, crossing the room, flipping the record over and placing the needle down onto track 1 of side B. There was a lot of physical engagement in listening to an album.

But while recorded music was expensive, concerts, were cheap. That’s because they were the loss-leaders designed to get you to buy the merchandise and albums. But as David Bowie so accurately predicted back in 1980, the moment music becomes free (as it now has), artists and their employers – the record companies – will have to recoup their costs through live performances at hundreds of dollars per seat.

Because modern music is free or mere pennies, and because it is available for instant download, no time is needed to think through the purchase decision, to debate whether the tunes are worth buying, or to spend time afterwards listening over and over to the tunes if only to justify the cost of the purchase. There is always more on its way, coming to you with almost no effort on your part. And that has profound impact on how the tunes are crafted.

Instant access means that tunes must offer a combination of universal appeal, familiarity, and instant appeal. To be too different entails too much risk and instant abandonment. Tunes must have an immediate  instant hook – no long-extended introductions allowed – and in many cases the tunes play out as a backdrop to the artist’s video, both on YouTube as well as on the live concert Jumbotrons.

Still, there’s nothing inherently wrong in that. Art must always strike a balance between innovation and comfort if it is to make money.

The early hook rule applied back in the 1970’s too. A tune had to have something compelling within the first four seconds to get the attention of a record company, and later, the listening public. Perhaps the best and most compelling song opening is the “Oogachakka-ooga-ooga” opening to “Hooked On a Feeling,” by Blue Swede available on YouTube here.

So I’m not sure I an agree with Thoughty2 that there is anything wrong with modern music. It’s what people want to hear, and is a direct product of instant and always-on media that modern consumers have grown up with. It’s just a very different approach – one that has flipped everything around.

I will always stick to the old-school, vinyl-oriented music of my 70’s youth. But music is to be enjoyed, so whatever kind floats your personal boat is never wrong. If it brings you joy, if it makes you feel good, if it adds to your life, it has done its job.

But just for the fun of it, and in case you have a couple of hours to spare, here’s a list of tunes with long introductions that I think are worth the effort. If you want more, here’s the list from Songfacts.com.