Discovering the Amazing Portable Universe of the iRig and Amplitube

There is a scene at the very end of Men In Black II where J and K open an exit door to reveal an entire universe that earthlings know nothing about. It’s more than just a door. It’s a portal. And I know it’s just a movie and this might sound like a stretch, but that’s kind of how I felt when I brought home an iRig and its Amplitube iPhone app.

When my last teeny tiny mini practice amp (a VOX headphone amp) got broken, I wandered down to the local music store to get a new one. Before shelling out the required $60 Canadian for a replacement, I had a quick look around to see what else was there, and that’s how I came across the iRig. It was on sale for $49.95 so it became immediately more attractive. I assumed it was an Apple product because of its name, but it isn’t. I also assumed it would be just another pocket amplifier, handy for practicing and playing along to my Spotify playlist. But it wasn’t that either. I soon discovered it was a lot more than that.

The iRig is part of a family of products made by IK Multimedia in Modena, Italy. The company is staffed by sound engineering geniuses who accurately and faithfully replicate the sounds of world famous amps, cabinets, microphones and pedals. They make it all available as a virtual studio that lives on your phone, computer or tablet. (They make more than just the iRig and Amplitube, but I’m just going to focus on them for the moment.)

Discovering the Amplitube app was an eye-opening moment. As a teaser it provides you with a couple of amps and a few free pedals. The amps are brand name – Fender, Marshall, Mesa Boogie. The pedals are thinly disguised and very identifiable replicas of famous brands like MXR.

The people at IKMultimedia are obviously passionate about detail. Nothing escapes their notice. On the sound side they seem to be able to bend heaven and earth to replicate the sound of, say, an 1967 Fender Twin with a slight nick on the speaker cone and some wear and tear on the casing. If you don’t like how that sounds, you can move your virtual Sennheiser mic a few inches back, or maybe swap out one of the speakers for another brand. They are that focused. The detail can also be seen in the casings of the products. Whether it’s the virtual pedals or the virtual rack mounted effects, they have captured the brushed aluminum, the yellow bulbs inside the VU meter windows, the sheen of light on the plastic knobs, even the texture of masking tape hastily placed across a scuffed and beaten Fuzz.

It’s truly amazing to experience the sheer variety of the products, not to mention the quality of the sounds they produce. This is why the Men In Black II scene comes to mind. My purchase of this simple iRig was like opening a dor onto the world’s largest music store.

I am nowhere famous enough to be paid to write this, by the way. This is not some sort of thinly disguised ad. I am writing it because as a musician grew up with stomp boxes (mainly BOSS), and analog tape recorders, to be let loose in the freemium world of Amplitube, especially with its painstakingly produced vintage retro packaging, is quite mind-boggling.

How Does it Fare in a Live Setting?

Naturally, because my personal passion is live performance, as compared to studio recording or composing, I want to know how all this cool stuff would stand up to the stage. First, I had to get my head around the idea of going direct through the board. There’s no need for an amp or pedals when you have it all on your iPad. Second I had to get used to the idea of playing through an iPad. This, too, seems crazy at first glance, but when you think that most pedals and amps now have circuit boards and software inside them, it’s kind of a fait accompli.

But is it cool to have an iPad or PC sitting onstage with you? Keyboard players get to do it after all. 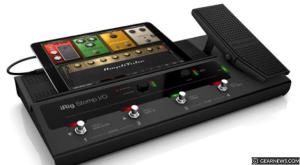 So maybe an all-virtual backline is the way to go.

I learned that I wouldn’t need to have to whip out my phone between songs to change settings. Not when there’s one of these available!  This is the iRig StompIO, a floor mounted control panel for your Amplitube presets. As you can see it comfortably cradles your iPad and even recharges it while you play.

Does it work? Is it safe to go onstage with the same iPad that has my TurboTax files and my family photos on it? I expect so. Truth is, I haven’t tried it in a live setting yet, because I am still discovering the parallel world of onboard amp modelling software on my BOSS Katana. But hey! Who’s to say I can’t do both?

So for now I use the iRig and a selection of pedals for practicing when I am on the road on business without my music gear. Maybe within the year I will be able to post a follow-up blog with my experiences playing a gig through the StompIO.

In the meantime, if anyone actually reads this and has had some experience with it, I would love to read your comments.