A year has come and gone since the passing of Yes bassist Chris Squire, and his absence is palpable. I was lucky enough to see him twice, during the In The Round tour of 1978, supporting the Drama album, and then in 2013 in Massey Hall, Toronto.

Although I have been a fan of Yes since the mid 1970’s I never truly appreciated the enormous musical power provided by Squire and his road-worn Rickenbacker.

Whereas many bass players are content to stand back and drive the bus, Squire was never in the background, literally or musically. His enormous persona dominated the live stage. He strode around like a Tolkien giant, conducting his band mates and the audience simultaneously, alternately scowling in concentration and then beaming with satisfaction.

But it was his virtuosity as a musician that was really head and shoulders above most of his contemporaries. For Yes, the bass was never just an device that delivered the bottom end of a tune. Squire played it as a full instrument, delivering lines and counter melodies in exquisite harmonies – often minor – to those being played by the equally fiery fingers of the other brilliant musicians who were part of the lineup at one time or another.

Squire played bass the way Bach wrote his fugues. Melodies crossed over each other with force, yet with delicate balance. I would love to have been a fly on the wall in the recording studio, watching the collective genius of Squire, Howe, Anderson et al as they pieced together their tunes.

I am also fascinated by successful musicians like Squire who hang on to the same guitar for decades, as he did with his cream colored Rickenbacker. Like so many others, he had the money and pretty much every instrument manufacturer on the planet eager to give him a guitar or ten to play and endorse, And yes, he did have a few of those. But above it all, he stayed with his 1965 Rickenbacker, through re-paintings, neck shavings and even the odd piece on it that didn’t work. I love that. Andy Summers of the Police and his beat-up double coil Telecaster; Sir Paul and his Hofner Beatlebass. Brian May’s Red Special. It’s wonderful when these people stick with their favorite instrument like an old sweater, even in spite of the carefully made replicas available. 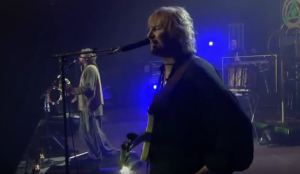 There is some fabulous pro-shot footage of Yes playing live in 2002, which shows the band in top form. Everyone seems to be smiling, and the chemistry between Squire and drummer Alan White seems to be extremely strong. They close with I’ve Seen All Good People, and the show is made even more powerful by the presence of the awesome Contemporary Youth Orchestra. Here’s the link to YouTube.

With Squire’s untimely passing, the band has moved into a new edition, with longtime sideman Billy Sherwood taking on the task of filling Squire’s enormous shoes, again, both literally and metaphorically.

There are sadly very few bassists who are recognized for their virtuosity, stepping over that line from fancy bass work to actual composition. Sir Paul is one, certainly, Geddy Lee, absolutely, and Les Claypool. I find the hallmark of great music to be something you can play over and over again and never tire of it. In large part due to the sophisticated layering of so many great musicians, much of the Yes catalog fits into that category, thanks to the genius of Mr. Chris Squire.