We went to see Yes play at Toronto’s Massey Hall yesterday (April 11). That’s my back-of-the hall iPhone photo. They delivered a flawless performance, playing three albums in their entirety, and ending with “Roundabout.” Just like the Rolling Stones and so many others, they dispel the myth that live performers have an expiry date, and though most of the Yes line-up are now in their sixties, they powered through the tunes with a crisp accuracy that very few bands can attain. Massey Hall has excellent acoustics, and the signature sounds of Yes – Chris Squire’s custom-wired Rickenbacker 4001, and Steve Howe’s crystal-clear guitars reached all the way up to the nosebleed seats.

So, indeed most of the band members are in their sixties, but not so the lead vocalist, Jon Davison. Jon is amazing. He sings with pronounced passion and soul in the demanding alto range established by his predecessor, Jon Anderson. Even their names are strikingly similar. He blends so well with the music and looks so happy up on stage, it was hard to believe he is such a new addition to this giant of a band. 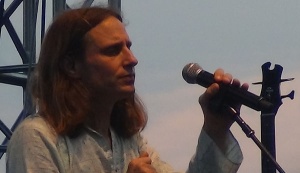 His story, too, is an amazing one, mostly because he has lived the dream of many hundreds-of thousands of musicians: he went from fronting a tribute band to fronting the band itself. How unbelievably cool is that?

According to Wikipedia, Jon was a musician friend of Foo Fighters drummer Taylor Hawkins, and long story short, Hawkins was also a friend of Chris Squire. So the connection was made.

An ironic twist here – Davison actually replaced another tribute band frontman, Benoit David of Montreal, who was the first to take the heat from Yes purists for replacing Jon Anderson, and who was sidelined, just like Anderson, with respiratory issues.

So along comes Jon Davison, and his voice peals beautifully through the complex verses of 1970’s Yes, and captures the spacey, lyrical Roger Dean-ish mindscapes that most members of last night’s audience grew up on.

For someone such as myself, who relishes virtuoso musical performance, and who strives to play as accurately and as soulfully as his own minor talent will allow, to watch truly gifted artists at work is an absolute pleasure, and to see artists such as Davison literally fill the space between legends such as Squire, Howe, Alan White and Geoff Downes, adds an additional vicarious thrill.

Yes has a gruelling tour schedule ahead of them. I wish them many, many standing ovations along the way. They deserve them all.